This weeks Midgard: Zobeck recap. It was a short session, but we got some stuff done.

Waterdeep: Dragon Heist (W:DH) is more than just a setting or adventure; Wizards of the Coast used it to sneak some new interpretations of the rules. Reading through this adventure, I caught a lot of unique situations that gave old rules a new twist or brought up something hither-to uncovered by the fifth edition Dungeons and Dragons rules. Here, in order of useful, interesting and annoying, are the things I found in W:DH.

Stealth is an oft used skill at my table, the ability to sneak past or up to your enemy is a nice option to have. W:DH gives two additional options in the case your sneak-thieves need a little help. Take disadvantage on stealth to give someone else advantage, I really like this as it moves the math around and someone with a high stealth can be seen to pad load armor or cast stones off in a different direction to distract the perceiver's attention from the character being aided. A second little tweak gave advantage to those trying to sneak through a carpeted house. From this we can see the developers (of this adventure, at least) intended to have advantage handed out regularly.

Stealth wasn't the only check that got some options, gambling players (Three Dragon Ante) get to roll Intelligence (Gaming Set) to win a game. I never came up with this myself, using sleight of hand instead, but now I will have this to fall back on. I think if I use it I will restrict it to cards/dice/board games depending on the gaming set chosen by the player. There is a combination safe hidden somewhere in Waterdeep and if you want to try to open it you need to make a Dexterity (investigation) roll. I would have went for Intelligence (Thieves' Tools), but the designer's choice fits better (and there is no stethoscope in Thieves' Tools). Combat got a little love, with the first ever strength based longbow appearing. It acts like a normal longbow but is larger and its damage is 2d6 plus strength modifier, bumping up average damage by 2.5!

Instead of making non-player characters entirely new stat blocks, the writers just directed you to currently published stat blocks and added racial abilities to them. This is something that third party publishers (like Kobold Press in Tome of Beasts) have used before, but to my knowledge, this is it's first appearance in fifth edition. This makes good use of the NPC Features table in the Dungeon Master's Guide. Speaking of tables, the awesome Rooftop Chase Complications table has some good ideas for things to throw at players in cinematic rooftop chases.

Some of the more interesting things I found are more niche uses. There is a slime covered floor that causes problems (difficult terrain) for creatures without the slippery trait. A fresco that charms you in to hanging around and protecting it. More information on running a business is great to have. Faction quests, Scroll prices, and weather effects round out this list of may be useful in your campaign things.

Only a few things stuck out as bad in my eyes. Advice on ending chases mostly came to "or when you want the chase to end," which is to say they aren't relevant and are just exposition. In my eyes that's stuff that should just be explained; giving a player no chance of changing the outcome is a bad presedent to set. Also making a map with ten foot squares is another odd choice of the developers. Fifth edition dungeons and dragons uses a five foot square grid for miniature play and all the maps in it's products should support that. The only other thing bad I can say about W:DH is that they use pages to reprint monsters who aren't in the monster manual. I get the idea behind this, but it feels like a waste to have multiple sources with the same monster.

All in all, if you like official adventures this is another step forward for wizards of the Coast. I like that the adventure makes me reconcider some of the ways to use rules by giving new examples. I really like the modularity of the book and will reuse a lot of the material in here for my homebrew campaign even though I am not planning on running it yet. You can buy Waterdeep: Dragon Heist at your friendly local game store or on Amazon (affiliate link).

Seven Hexes For Use In Your Campaign 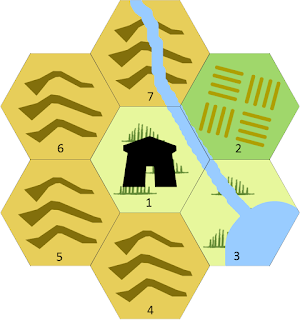 This is a slightly updated version of the one that appears in my Nuggets #1 zine.
I've been creating a new world seven hexagonal spaces at a time. Here is the beginning of that; an area for your player character to explore around a small village. It is written system agnostic and is easily adapted to any edition of old school role playing games. In fact, I used the tables in Zak Smith's Frostbitten and Mutilated for inspiration! The village, Victoria's Tower, was built around and is named after a the wizard's tower at its center. There was an accident and the sun is frozen at dusk for 20 more days (totaling a month). The village and its surrounding hexes are stuck out of time. Anyone can travel back and forth, but no time passes naturally until the end of the month. Spells and other magical effects work normally.

1) Plains And Village
A mage, Victoria, lives in a tower and a village has evolved up around it. Victoria built here because of the magic contained in the burial mounds from a long dead civilization.  The village provides reagents from the sea in exchange for protection from the wizard. Victoria has frozen herself and cannot fix this. Her tower is protected with glyphs of warding and arcane locks. There are about 20 small crates filled with enchanted fish (see 12) here waiting for Victoria to open her door.

Mostly farms and the location of the ancient burial mounds, these plains feed the village. There is an underground tunnel connecting the mounds to Victoria’s tower. If the twelve mounds are explored, four are connected to the tower and found emptied, four more are silent, and the last four are haunted by undead. One contains a flail, Beast Render, that smells of patchouli and deals +2 damage to beasts.

A body of water where fishermen catch gillies and stuff them into enchanted scarecrows on the shore. After four days the fish are removed and delivered to the wizard. There is also an island where reagents and medicinal herbs are grown. Barren mothers (unknowingly cause by Victoria’s experimentation with ancient magics) come here with their husbands to tend the area while the men fish.

A well traveled road has signs of a fight and two dead worgs killed by a piercing weapon. There is a woman nursing her wounds under a small rocky overhang away from the road. Lune, an elven warrior, is armed with 2 short swords. She stands her ground if threatened, but seeks to be left alone. She is bringing the remains of two humans to add to the scarecrows in area 3. Once a month the scarecrows need to be refilled with fresh kills. Only Lune and Victoria know of this dark deed. Lune will not let players know about this unless her life depends on it. She will say that the remains she carries are from her family and she is making a pilgrimage to the lake to bury them at sea.

These tree barren hills hide a duchess, Lady Em Winter-Borough, waiting under the moonlight for a clandestine meeting with one of the clerics, she is dying and has a book of secrets to trade for a cure. The players will not recognize Lady Em, as she is from a kingdom far away. She claims to be Dass Whitehall, a noble from a nearby kingdom and is waiting for her slower coach, with her luggage, to catch up. Her coach is hidden here and can be found if players search the hex. If the players search within the coach they can find a diary and a contract that reveals Lady Em’s true identity and the fact that she is dying.  Her family made a pact with a devil that has cursed her with disease. She is looking to find a cure or a loophole in the contract.

An ogre, Rockgrinder, make his home here in an out of the way cave that players can find if they search this hex well. He hides if seen and has promised a raven (actually Victoria) to keep the town safe. Rockgrinder has a ring that lets him talk to animals and uses them for information. In addition to hunting predators, the raven leads him to food, but has been absent for over a week.

The wizard’s apprentice stays with a group of traveling men. These are clerics of an uncaring god and they seek to destroy the wizard because she is tampering with ancient magics. The clerics have no names. The apprentice can locate all the wards in the wizard’s tower and is being charmed by the clerics to give them the information. The apprentice has not entered the tower in eleven days for fear of accidentally setting the wards off.

Richard Fraser has been roleplaying since the early days of Dungeons and Dragons and started with the red box in the eighties. He currently prefers to DM fifth edition D&D, though reads a lot of OSR and PbtA. He currently has podcast, Cockatrice Nuggets and maintains this blog.