I’m working on a few new systems for my hexcrawling and thought I’d bring you all on the ride! I mention my time pool and thought I’d explain it here. Every time a player does an action that takes between three and ten minutes I drop a die in the time bucket. Once a sixth die is dropped in there or if they do something that would attract unwanted attention, I roll the dice and check for an encounter. The number of successes correlates (ideally) with the encounter difficulty. OK, time to get to work.

I’m trying something new for my random encounters, traces, spoor, and encounters. I’m also counting successes by setting a base DC for an encounter and then subtracting my roll to get a degree of severity. Each degree checks off a box in order of traces, traces, tracks, spoor, lair, and creature, each step revealing more of the possible encounter. I’ve decided to start this because of how I roll encounters (with a time pool) for dungeons. Right now I’ve set DCs for five categories. Let’s take a look.

So if the frontier encounter roll is 19, three boxes are checked (17, 18, 19); so traces, traces, and spoor is found. The next encounter check will add to the same set of boxes and will clear after the encounter roll for overnight. Using six mile hexes rolling once for each hex and once for rest will get me five rolls. Of course, thinking more on that, that’s only on easily traveled land. This leads me to think there will never be an encounter on a mountains hex as it takes one day to cross a mountain hex. Also wild encounters may be more prevalent in unsettled territory than in densely populated areas, but encounters in general may not be. So let’s change some things.  I think I will roll encounters based on time and use these descriptors and DCs instead.

That makes it so I can roll every four hours bringing the daily total to six encounter rolls two of which being at night. So this seems to work out for monsters, but in civilized areas there will be more encounters with humanoids. We can count the lair as a camp, outpost, or hideout. I’m thinking we can skip some of the smaller steps in the ladder if we want. Say finding some traces and spore next encounter rolling past lair and heading straight to creature. Switching lair and creature in the order is an option too, resetting the boxes after a creature is rolled.

Easy! I’m not sure where to put torches at, I’ll leave them in both hours and minutes for now and see where I use it the most. Hours seem like the most for me because I use a time pool to track hours, but that’s only indoors.  Now I’ll just format, print, and laminate it and have exactly what I need. I printed it out with graph paper on the back and presto, a new tracker for my table, hopefully it lasts through testing. 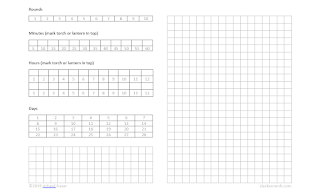